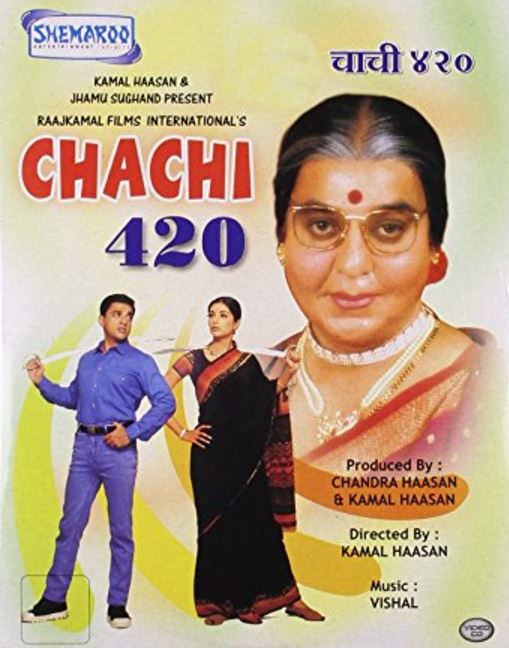 Plot: A single father decides to take care of his daughter by becoming a female caretaker of his ex-wife’s household.

Why is it Funny: Chachi 420 heavily draws from the classic Hollywood comedy film Mrs. Doubtfire. It was only Kamal Hassan who can pull off the eccentric performance of Robin Williams in this genius remake.

Chachi 420 is a cult classic comedy film and it surely deserves a high spot in this list of best Bollywood comedy movies. 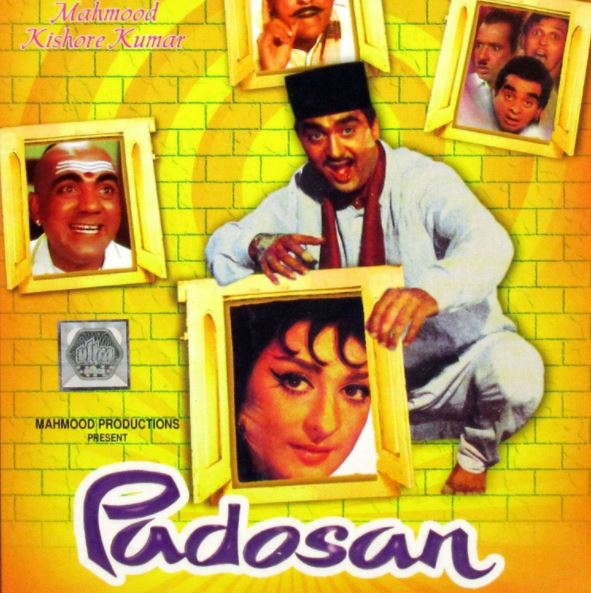 Plot: A Young man falls for girl next door. His friend Vidyapati takes it upon himself to set Bhola with the love of his life.

Why is it Funny: If a movie is able to entertain the audience even after 50 years then you can understand how great and beautiful that film is.

Sunil Dutt starring Padosan has entertained generations and still, it is one of the finest comedy movies that India has ever produced. 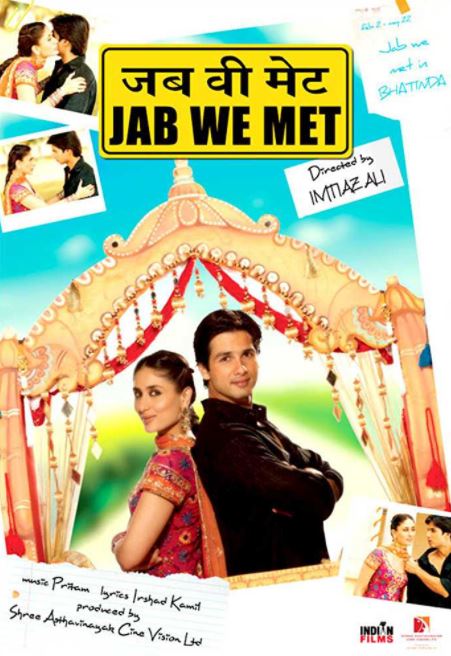 Plot: A rich business tycoon who falls in love decides to commit suicide. However, his decision changes when he meets a bubbly girl named Geet.

Why is it Funny: Imtiaz Ali looked a promising director a decade back but now he has used up the coming of age comedy formula way too much. Still, Jab we met is his finest film and surely is placed among the funniest Bollywood movies.

Kareena Kapoor is the show stealer of the film. 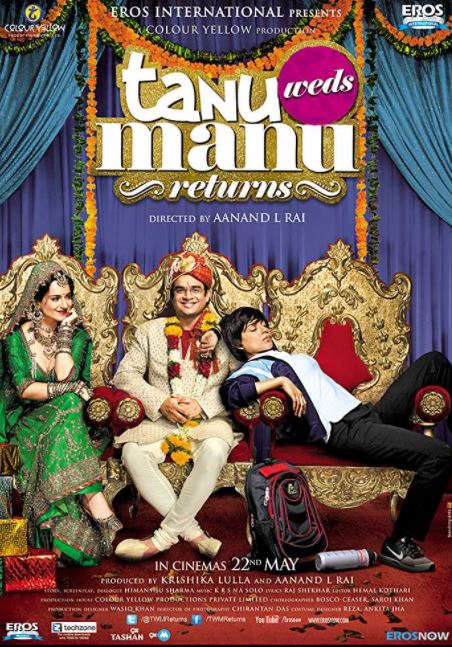 Plot: An NRI doctor wishes to marry a beautiful girl named Tanu but fails to win her heart.

Why is it Funny: It is the sequel that made me place this film in the list of best Hindi comedy movies and that too in Top 20. Anand L Rai brilliantly directed the sequel that perfectly suited the original film.

It is acting of Kangana Ranaut as Haryanvi Jatni Kusum Sangwan that makes the film worth watching.

Funniest Scene: When Raja finds out that he is cheated again. 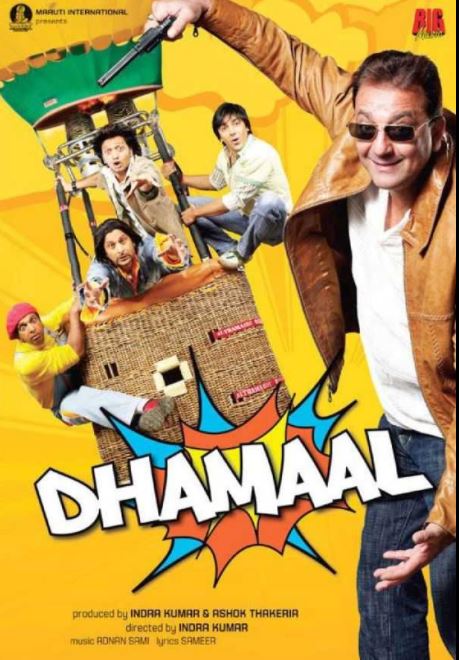 Plot: Four friends witness the death of a rich man who before dying tells them about a hidden treasure in Goa. The four then race for Goa to grab all the money.

Why is it Funny: Dhamaal is a perfect situational comedy that is made better by the actors. The film was produced in the era where ensemble comedies were common. 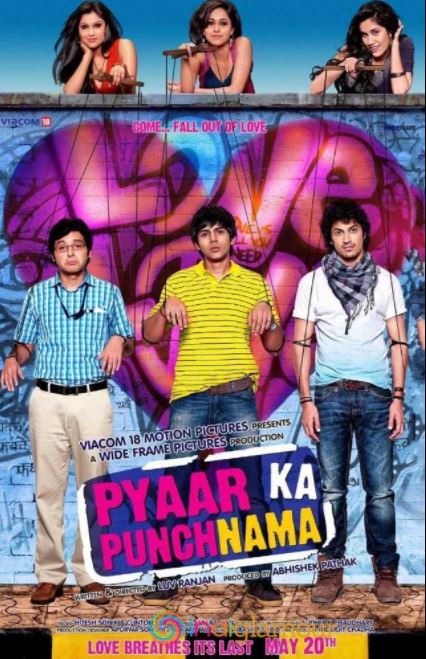 Plot: Both films show how girls manipulate their boyfriends and keep them away from friends and family.

Why is it Funny: Some people might get offended by this film but to be honest the title of the film itself clears what the movie is about. The film surely shows girls in bad shadow but overall it is a fun watch. 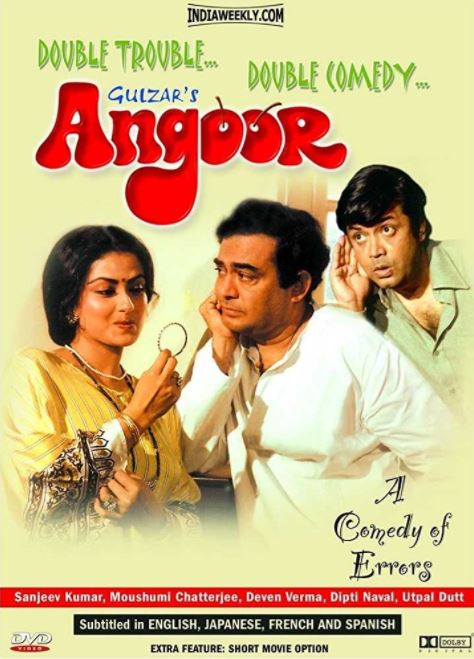 Why is it Funny: Angoor is based on the famous play The Comedy of Errors penned by great Shakespeare. The film might not make you burst into laughter but it will surely lighten up your mood and make you feel good.

Sanjeev Kumar and Deven Verma’s acting makes it one of the best Hindi comedy movies. 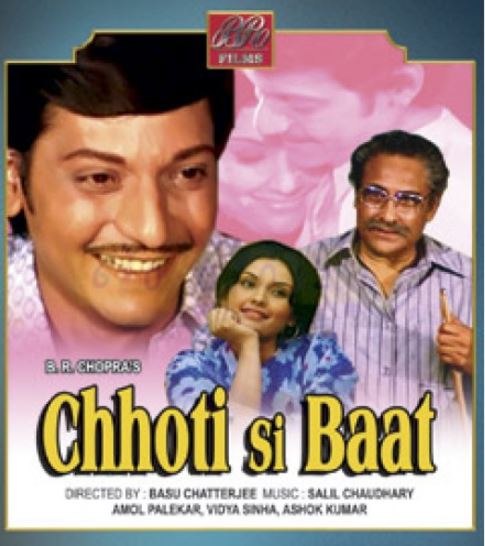 Why is it Funny: Bollywood is known for its romantic comedies but to be honest there are very few movies that do justice to both genres. Choti Si Baat is one among them.

Amol Palekar perfectly plays the role of a nervous lover who wants to impress his crush. Ashok Kumar’s sheer presence on the screen makes It worth watching.

Funniest Scene: When Arun tires to woo Prabha with a Motorbike 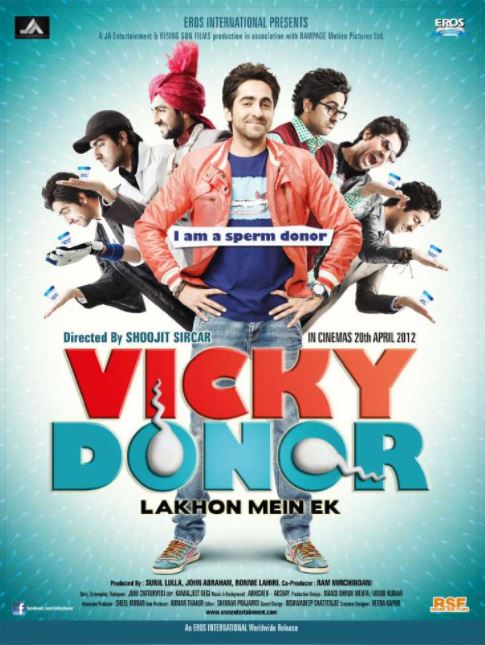 Plot: Dr. Chadda finds out that Vicky is a healthy sperm donor who can help thousands of couples through his gift.

Why is it Funny: Vicky Donor came as a breath of fresh air into the era of forced comedies. The concept of the film was unique and it struck the right chords with the audience.

Not only the film was a success at the box office but it was also able to bag the National Award for Best Film.

Funniest Scene: When Vicky becomes a donor he never wanted to be

11. Golmaal: Fun Unlimited (and Other Movies in Series) 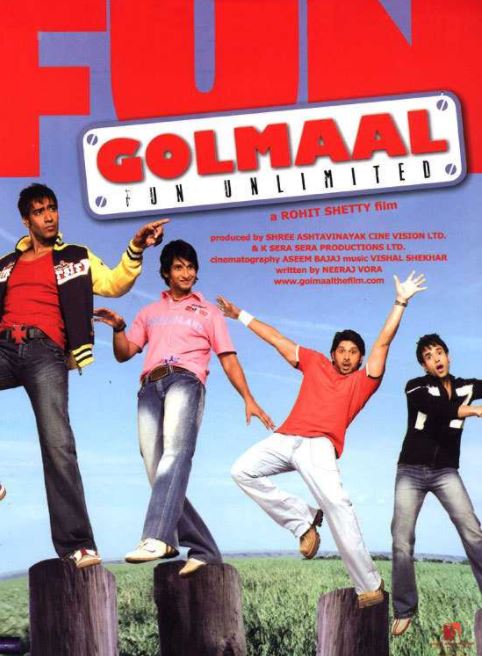 Plot: Four mischievous friends find shelter in the house of a blind couple who is waiting for the return of their NRI Grandson, Sameer.

Why is it Funny: It was Golmal that made Rohit Shetty a household name. His style of comedy was fresh at the time and was loved by the audience. Even though he has overused the same style of comedy in his movies yet we have to admit that Golmal is worth adding into the best Hindi comedy movies.

It branched out into several sequels yet none was as funny as the original film. 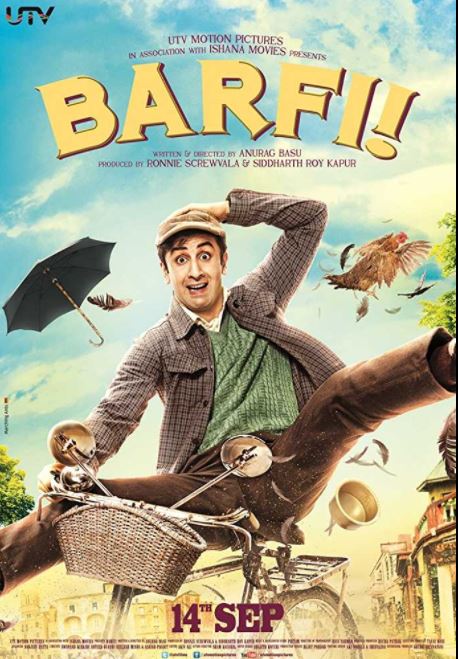 Plot: A Deaf and mute man falls in love with a beautiful girl who ditches him Years later the man finds true love in an autistic girl.

Why is it Funny: Many might say Barfi as a rip off of old Charlie Chaplin movies (and Mr. Bean Sketches). But then again mimicking someone is a talent too.

Ranbir Kapoor shines As Barfi, a mute and deaf man while Priyanka Chopra shows why she is one of the best actresses of Hindi cinema in this light-hearted comedy film.

Funniest Scene: The cat and Mouse chase scene between Barfi and Inspector Sudhanshu 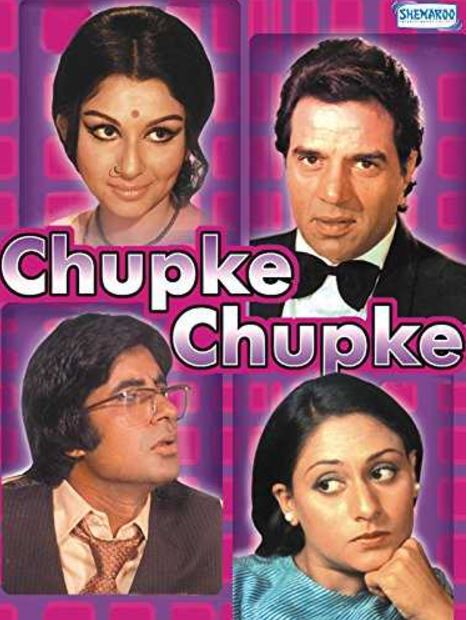 Plot: A Botanist decides to prank his wife’s brother in law after hiding his real identity and working as a driver at his house.

Why is it Funny: You will really miss old family comedy movies after you watch this film. Hrishikesh Mukherjee taught that how innocent comedy can be. It does not need vulgarity and double meaning jokes to make people laugh.

Chupke Chupke is a thorough fun ride that you would not regret taking.

Funniest Scene: When Kumar tries to explain his feelings for Vasudha to Parimal and Prashant 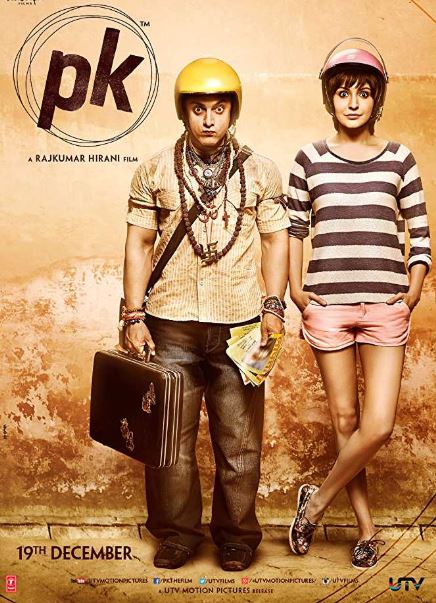 Plot: An alien loses his device on earth. He wanders in India to find his device but ends creating more troubles for himself.

Why is it Funny: Many of our readers said that PK deserves the top spot or at least deserves to be in Top 3. Yes PK is a great entertaining concept but you can see many similarities between PK and OMG Oh My God.

Aamir Khan’s acting as a Bhojpuri alien is a show stealer. 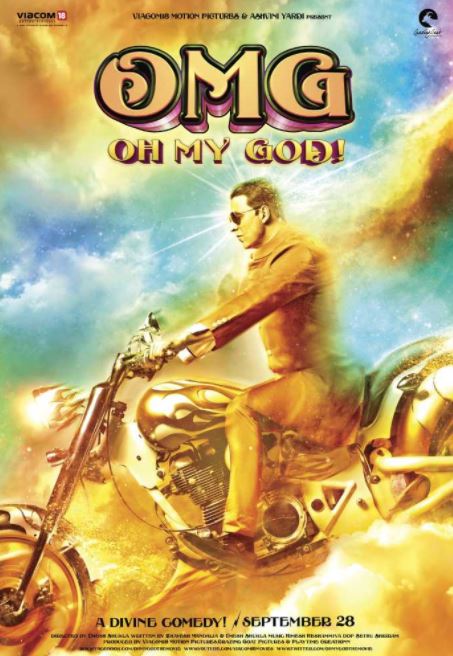 Plot: An atheist sues God for damaging his antique shop from an earthquake.

Why is it Funny : Indian cinema is run by superstars. It is hard to imagine a film earning even 50 crores without a superstar in it. OMG Oh My God is one of those rare films that showed that a good film can make money at the box office without a superstar factor.

The unique storyline is shown on the screen in a better way. You will love Paresh Rawal’s comic timing. Yes, there is Akshay Kumar but it is the other characters who stole the show.

Funniest Scene: The court scene where Kanji uncover every Baba.

Funniest Character: Mithun Da’s Leeladhar Maharaj (due to his mannerism) 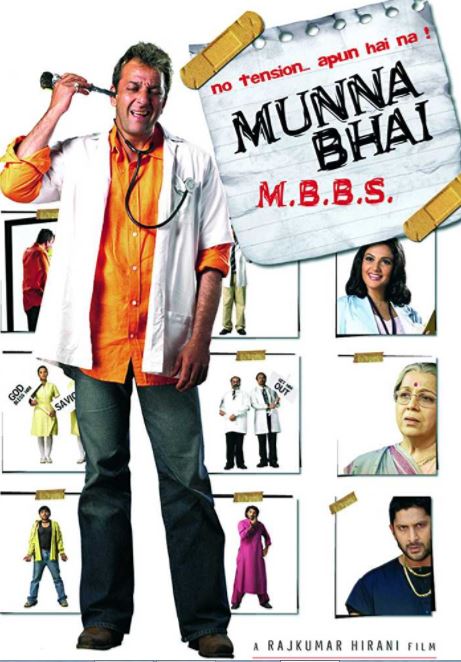 Plot: A gangster decides to become a doctor to fulfil his father’s dream. However, it enrages the staff of the college he is enrolled to.

Munna tirelessly read about Mahatma Gandhi to impress his crush, a radio Jockey. This result in him hallucinating Gandhi Ji in real life.

Why is it Funny : Rajkumar Hirani is the MVP of Hindi comedy movies. He has directed only 5 films and all of them are listed in this list of funniest Bollywood movies.

Munna Bhai resurrected Sanjay Dutt’s dying career and it became his most iconic role. This fun family film is not only a laughter riot but also teaches valuable lessons.

The sequel was even better than the original.

Funniest Scene: Dr. Asthana Laughter riot in the first movie and Circuit’s acceptance of Gandhiji in the second movie 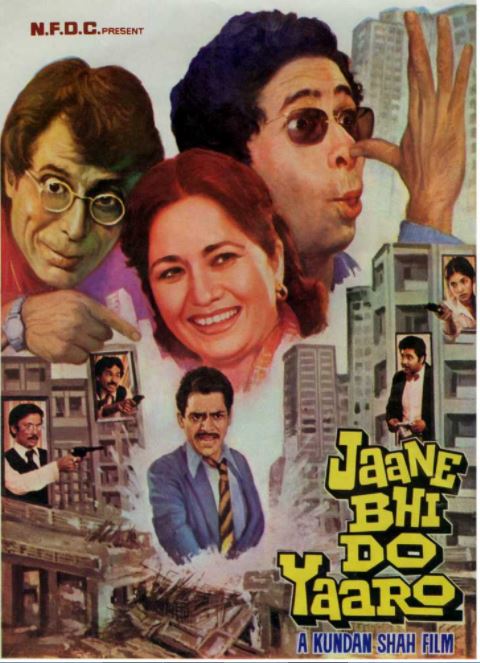 Plot: While working for a newspaper, two photographers tries to uncover the corruption of a builder and few officials.

Why is it Funny: Jaane Bhi Do Yaaro is probably the most underrated Hindi comedy movie on this list. The film deserves a wide recognition yet many Hindi cinema lovers have not seen this gem of a film.

Kundan Shah’s satire on corruption is beautifully shown in the movie. Om Puri’s acting as Ahuja is brilliant. While the Mahabharat scene is one of the funniest scenes of Indian cinema. 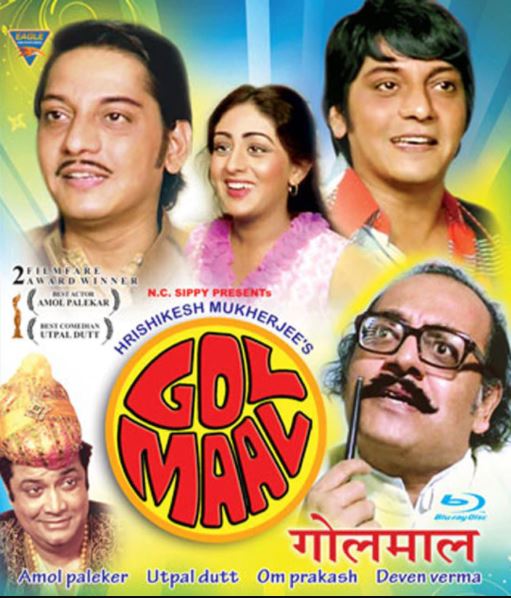 Plot: To save his job Ram Prasad lies about a twin brother (Laxman Prasad Sharma) to his Boss Bhawani Shankar.

Why is it Funny: All the situational comedies that you see today are directly or indirectly inspired by Hrishikesh Mukherjee’s cult classic film Gol Maal.

Many Indian comedy films tried to duplicate the scenes of Gol Maal but failed. It was not only the brilliant direction of Hrishikesh but also the chemistry of Utpal Dutt and Amol palekar that made the film a cult classic.

Funniest Scene: When Bhawani Shankar thinks that he found the truth about Laxman Prasad Sharma. 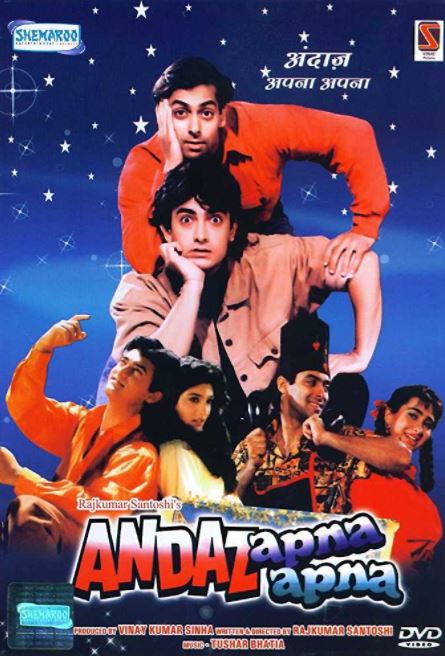 Plot: Two Daydreamers, Amar, and Prem, plans to get rich by marrying the only daughter of Rich Indian tycoon.

Why is it Funny: If Aamir Khan and Salman Khan are paired in a film today then the film is guaranteed to earn at least Rs 150 Crore. It is hard to believe that there one and only film together hardly minted 8 crores at the box office.

Andaz Apna Apna failed miserably at the box office but it was able to gain a fan following that is the wet dream of every film director.

In fact, it is one of those rare films that you can watch again and again, and still, you will thoroughly enjoy it. It is the best Feel Good film in the history of Indian cinema.

Funniest Scene: When Teja tells his goon about ‘Where is Mark?’ 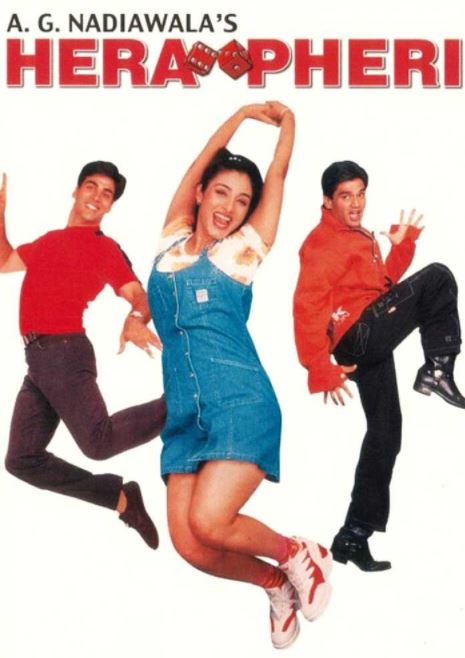 Plot: Three men decides to take benefit of a wrong call and make huge money from it.

Priyadarshan crafted Hera Pheri so beautifully that you will enjoy each and every character of the film. The movie was released in the last century and this film paved way for modern comedies. It established careers of Akshay kumar as a comic actor. Even though it spawned a sequel but it was no match to Original.

Funniest Scene: When Babu Bhaiya mistakenly grabs a rifle and Keep on asking whose rifle is this. 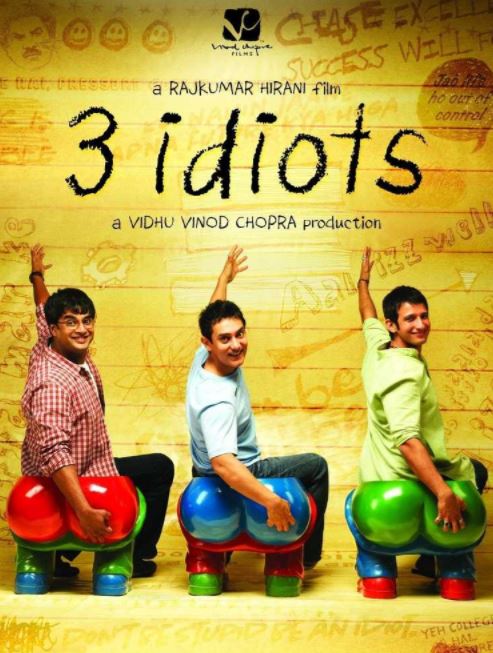 Plot: Two friends goes on a mission to find their long lost college friend Rancho who changed their life.

Why is it Funny: We rated 3 Idiots as the best Hindi comedy movies because of two reasons.

First, it is truly funny.

Secondly, it is educational.

Chetan Bhagat’s Five Point Someone novel was given a better version by the duo of Aamir Khan and Rajkumar Hirani. Not only they satire on the modern education system of India but also shows how much Indian parents put pressure on their kids.

So this is our list of best Indian comedy films. Did we missed any good Bollywood comedy movie – let Us Know. Which is your favorite comedy movie that you can watch again and again at the movie theater?