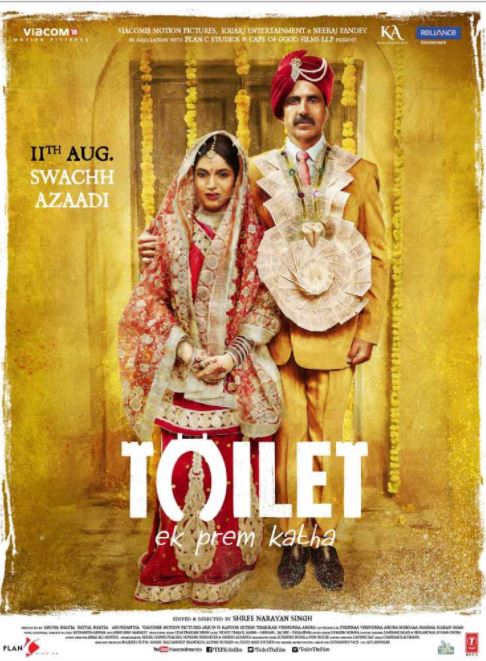 Plot: A Man is left by her wife after she discovers that there is no proper sanitation and no toilet in her husband’s village.

Why is it Funny: Akshay Kumar has given back to back hits from past 10 years. His 2017 film Toilet Ek Prem Katha is another super hit that made its way into the list of best Hindi comedy movies. The film was inspired by Indian Prime Minister Narendra Modi’s Clean India campaign. It showed that a movie can be entertaining and educational at the same time. 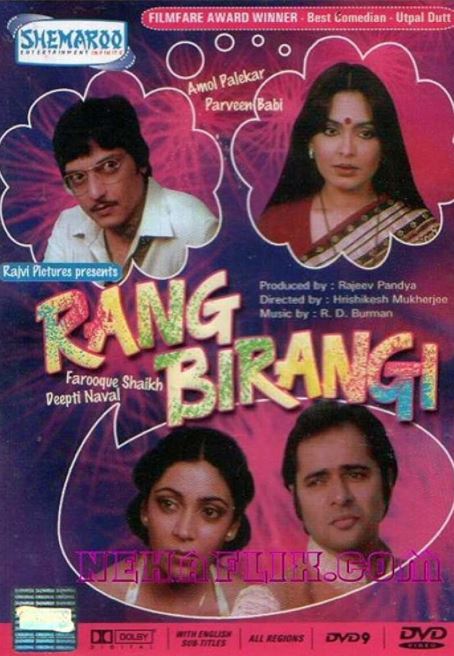 Plot: A brother tries to save his sister’s marriage by rumoring about the affair of his brother-in-law.

Why is it Funny: Hrishikesh Mukherjee was an expert in making unconventional movies. Rang birangi is one such movie that shows a unique side of a married relationship. 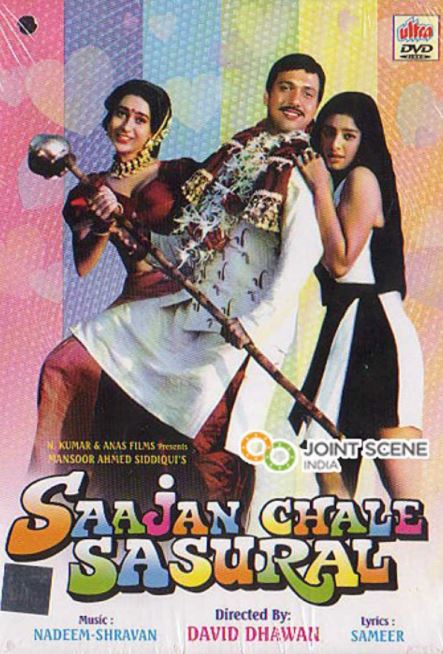 Plot: Forced due to circumstances a man gets married to two women. However, he has to hide this fact from his wives.

Funniest Scene: When Shyamsunder have to handle his two wives 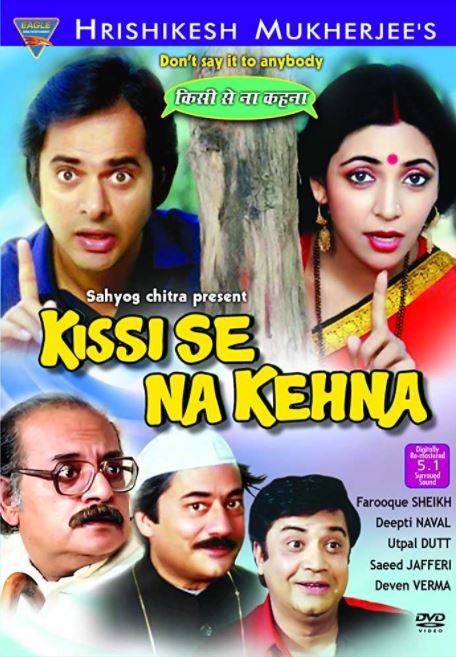 Plot: A widower decides to get his son married to traditional girl who values her culture. However, his son has already chosen a girl for himself.

Why is it Funny: Pick and watch any movie of Hrishikesh Mukherjee and you won’t be disappointed. Kissi se Na Kehna is one such film that stars the ensemble cast of Farooq Sheikh, Deepti Naval, Utpal Dutt, Saeed Jaffrey, and Deven Verma. 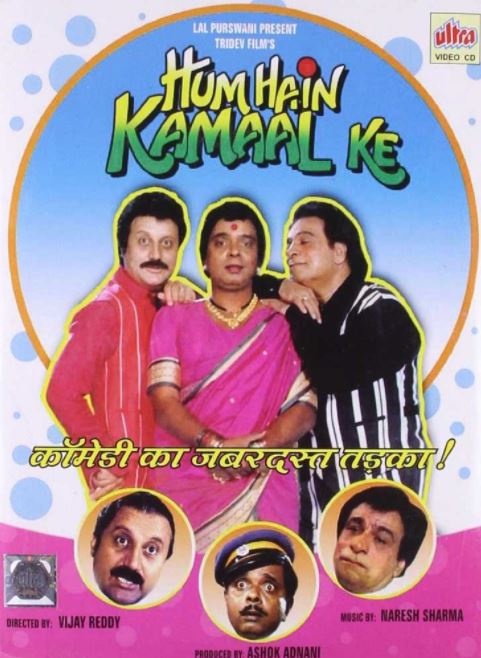 Plot: Two friends (one is deaf and other is blind) tries to solve a murder mystery that occurred in their store.

Why is it Funny: Don’t go by the IMDB ratings of this movie because it is one of the most underrated movies of Bollywood. Yes, the film does not make sense at so many levels but if you want pure laughter and comedy then Hum hai kamal ke is the movie that you should not miss. 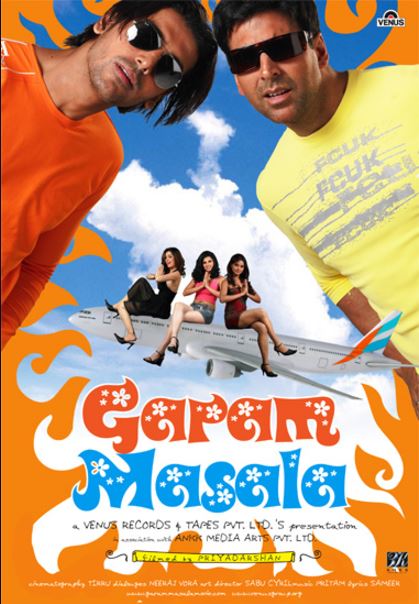 Plot: A Photograph flirts and set three different women only to find that his close friend has decided to expose his secret to the girls.

Why is it Funny: Akshay Kumar is such an enthusiast personality that he can ride the whole film on his own shoulders. It was proved with the success of Garam Masala. The film starred John Abraham and Paresh Rawal as well but it was comic timing of Akshay Kumar that made the movie thoroughly entertaining. 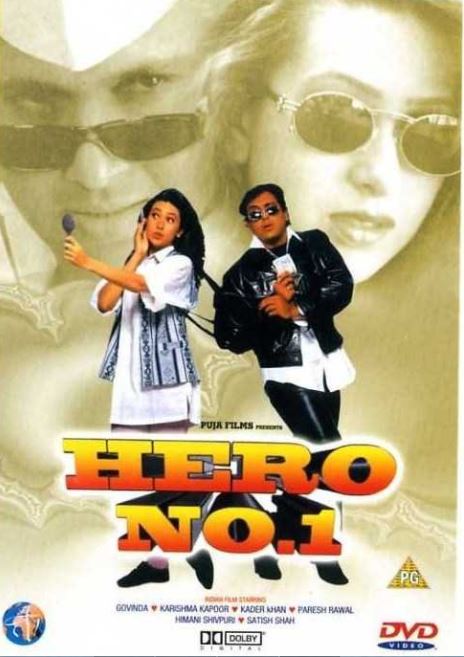 Plot: A rich man becomes a servant of his love’s household only to win their hearts and get married to her.

Why is it Funny: This comedy film has many scenes copied from hit Hollywood movies and TV shows including the iconic Clothes changing the scene of Mr. Bean. However, still, it was able to win the heart of the audience due to the evergreen pairing of Govinda, Kader Khan, and Karishma Kapoor. It has many elements similar to Rajesh Khanna’s blockbuster Bawarchi.

Funniest Scene: When Rajesh become the servant of Dinanath househould 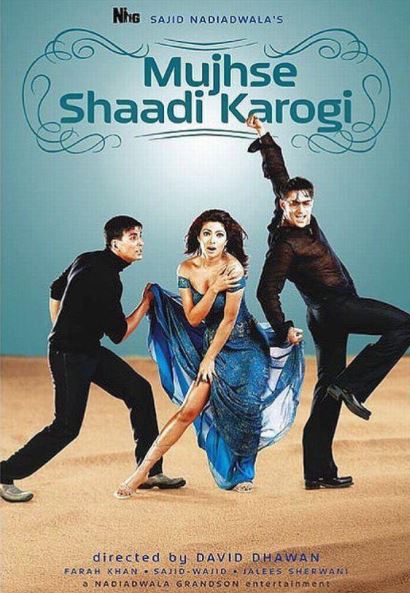 Plot: A man with short temper fall in love with the girl next door only to find out that his room-mate is trying everything to keep the couple separated.

Why is it Funny: David Dhawan has his own style of comedy. The man has given us many cult classic Hindi comedy movies and Mujse shadi karoge is one of them. It features the rare pairing of Salman Khan and Akshay Kumar along with Priyanka Chopra. It is also one of the last hit films of legendary Amrish Puri. 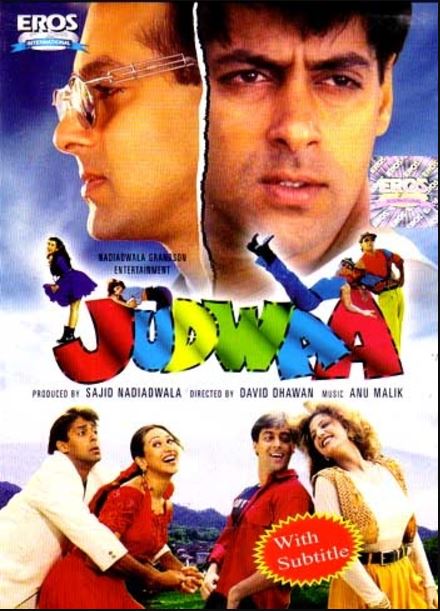 Plot: Two twin brothers are separated at birth in Mumbai. . Hilarity ensues when they find out the truth about each other.

Why is it Funny: Remember the Salman of 90s who was more of a chocolate boy and less of a Macho man. His hilarious acts in movies like Andaz Apna Apna and Judwaa gained him a huge fan following. It is a shame of Bollywood that such classic movies are getting horrible remakes. 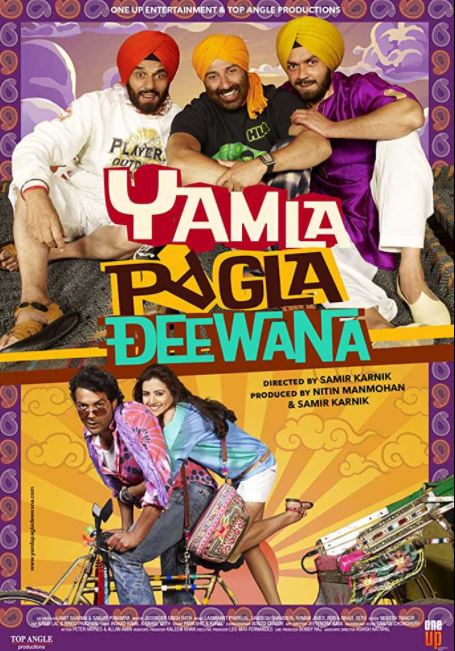 Plot: An NRI meets his estranged father and brother only to learn that they are wanted conmen.

Why is it Funny: What happens when the trio of deol family stars in a comedy film with a Punjabi flavor? The result is a hilarious comedy movie that will entertain you throughout. Dharmendra and Bobby Deol shine in this film but one man who makes it more entertaining is Sunny Deol. 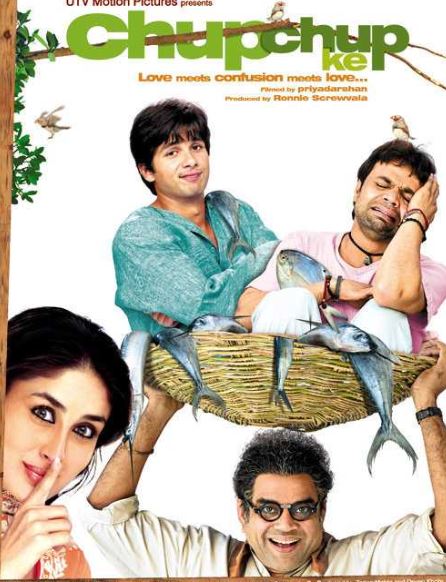 Plot: Frustrated from his debt, a young man decides to commit suicide only to be saved by another man who later sells him as a slave to a rich family.

Why is it Funny: We do not get family Hindi comedy movies nowadays. Chup Chup ke is one of the rare family comedy movies in recent times. Just like all other Priyadarshan movies, Chup Chup ke features an ensemble cast of Shahid Kapoor, Kareena Kapoor, Shakti Kapoor, Sunil Shetty, Om Puri, Rajpal Yadav, Paresh Rawal, and Neha Dhupia. 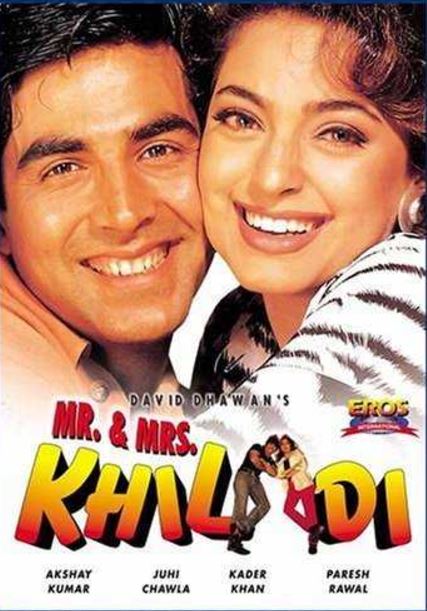 Plot: A Daydreamer scheme ways to become a millionaire. Luck turns his side when a rich girl falls in love with him. However, the father of the girl demands the boy to make 1 million rupees before asking for his daughter.

Why is it Funny: Even though Akshay Kumar was considered a comic actor after Hera Pheri but it was Mr. and Mrs. Khiladi that made Priyadarshan consider Akshay for Hera Pheri. Kader Khan is evergreen in this film and you will love the chemistry of Akshay Kumar and Juhi Chawla. There is also Paresh Rawal and Satish Kaushik who entertain the audience with their funny remarks. 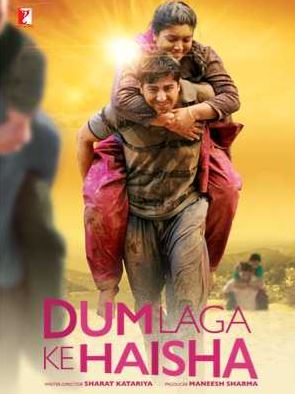 Plot: A couple participates in a unique race where the husband has to take her wife on his back and run. The problem is that the wife is overweight.

Why is it Funny: Watch out for the beautiful actress Bhumi pandekar who has given back to back hit films in recent times. Her performance in Toilet Ek Prem Katha and Shubh Mangal Savdhan was praised but it was her performance in national award-winning Dum Laga Ke Hasiha that made her one of the best Bollywood actresses of recent times. Watch this movie if you are looking for some light-hearted comedy.

Funniest Scene: When Sandhya Asks Prem to give back Her peace through a song on the radio 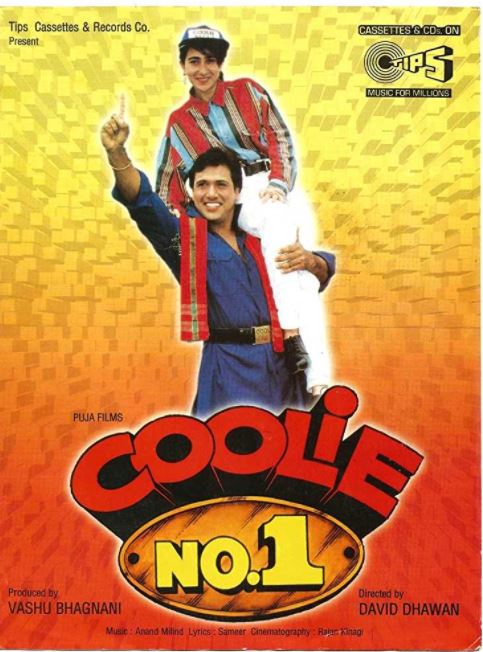 Plot: A Coolie falls in love with the daughter of a rich but miser and extra clever man Hoshiyar Chand.

Why is it Funny: Thanks to the iconic duo of Kader Khan and Govinda for making our childhood awesome. Thanks to them for giving us so many entertaining Hindi comedy movies. Coolie No. 1 is one such film where we get to see the unbeatable chemistry of the duo. Added to this is the beautiful comic timing of Shakti Kapoor and Sadashiv Amrapurkar. 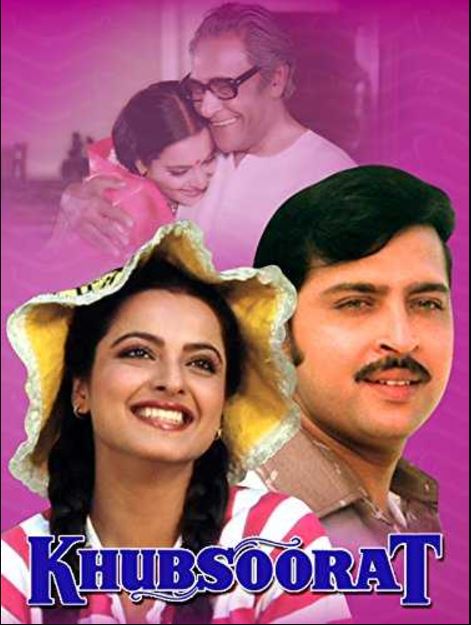 Plot: A Young girl goes to her sister’s in-law house. Angered from the strict house rules she decides to change the atmosphere of the household.

Why is it Funny: Bollywood and Indian TV are full of Saas-Bahu operas but only a few of them can be barely withstood and rare are those movies/shows that can entertain the audience of all age. Hrishikesh Mukherjee’s Khubsoorat is one such rare gem. Hrishikesh was a pioneer in a film making and you can understand his genius after watching this movie. The film also won Best actress Filmfare award for Rekha.

Funniest Scene: When Manju enters the house of her elder sister 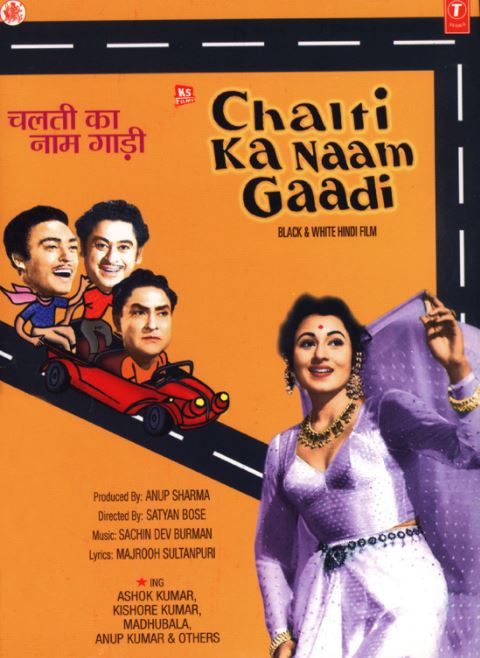 Plot: A Young man is betrayed by his lover. He starts hating women after his brother fuel his anger.

Why is it Funny: Remember the songs ‘Ek Ladki bhigi Bhagi Si’, ‘Babu Samjo Ishare’ and ‘Haal Kaisa Hai Janab ka’? All these three iconic songs are from this film. You can say that Chalti Ka Naam gaadi was very much responsible for making songs an integral part of Bollywood movies. Nevertheless, this Kumar brother starrer (Ashok Kumar, Kishore Kumar, Anoop Kumar) is a ride that you cannot miss. Arguably it is one of the best Hindi comedy movies of all time. 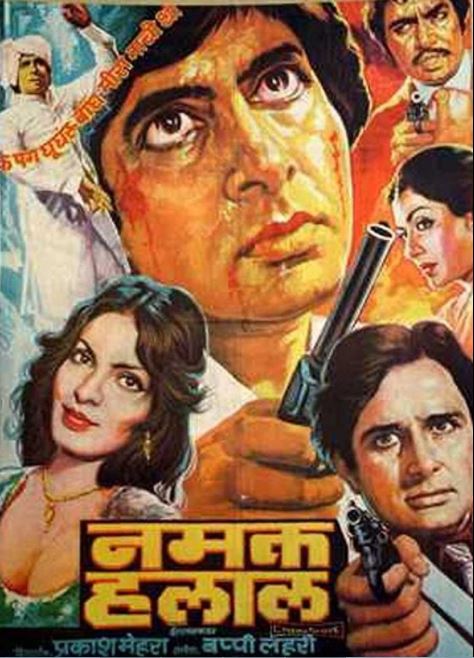 Plot: A loyal servant serves his master with full faith. He risks his own life when he learns that his employer’s life is in danger.

Why is it Funny: Amitabh Bachchan has given so many memorable performances that it is almost impossible for any other actor to surpass his legacy. Namak halal is another fun film of Amitabh Bachchan that also stars the legendary Shashi Kapoor. The duo has starred in many films but Namak Halal is the second best film of these two. Guess the first.

Funniest Scene: I can talk in English, I can walk in English scene (One of the most iconic scenes of Indian Cinema) 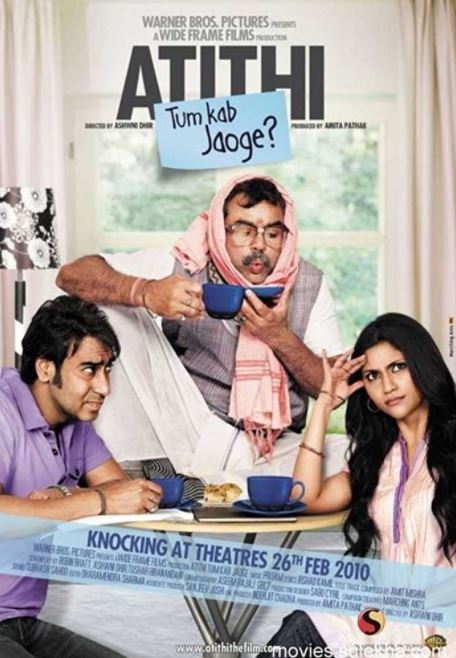 Plot: A man visit his distant relatives but can’t keep off his habit in nosing in their personal lives.

Why is it Funny: Almost every Indian can relate to this beautifully crafted film. After all, we have a natural problem of nosing into other people’s professional and personal lives. Athiti Tum Kab Jaoge is not full of laugh rides but it surely gives moments of sensible chuckles every now and then.

Funniest Scene: When it is revealed that Lambodar entered the wrong house 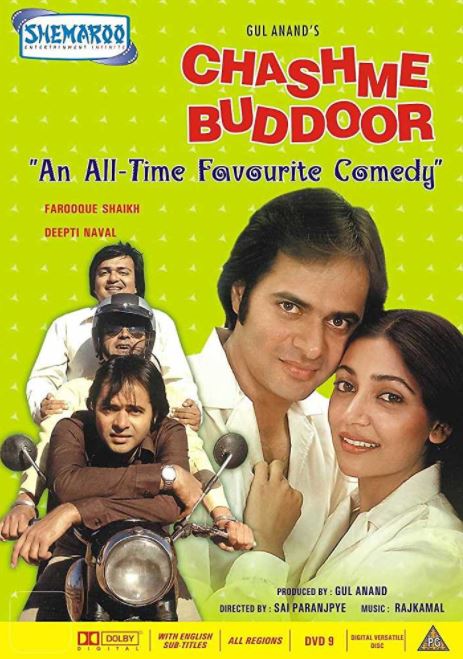 Plot: Three friends fall for a beautiful girl but in the end, she has to choose only one, the one who never fooled her.

Why is it Funny: Can you expect a much from a movie that is low on budget and does not have any big name attached to it? Chashme Budoor broke all the Bollywood movie making stereotype and stood out as one of the finest Hindi comedy movies of all time. The film captured the true essence of Delhi of the 1980s. If you belong to the city (or nearby) then you are surely going to relate to the story.

Funniest Scene: When the omi and homo tries to woo Neha one by one 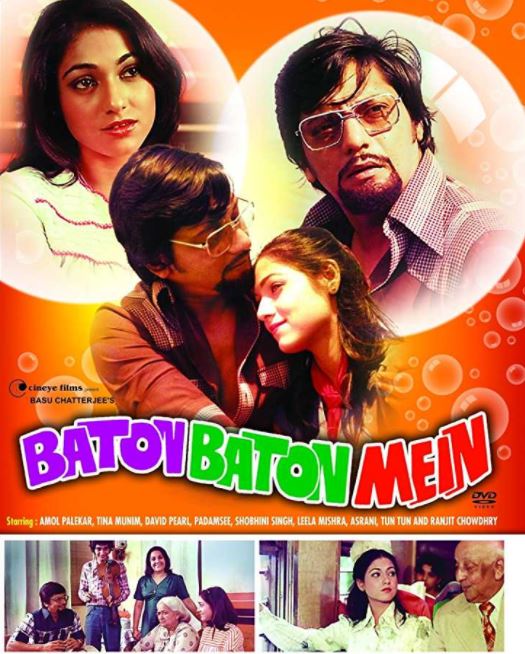 Plot: A young Christian boy fall in love with a girl but starts avoiding her when the girl’s mother ask for their marriage.

Why is it Funny: Mumbai was to Basu Chatterjee what New York was to Woody Allen. Both directors showed the lifestyle of these respective cities as if the city themselves are the character in the story. Baaton Baaton Mein tells the love story of a Christian boy and girl.

Funniest Scene: When the Mother of Tony and Nancy meets