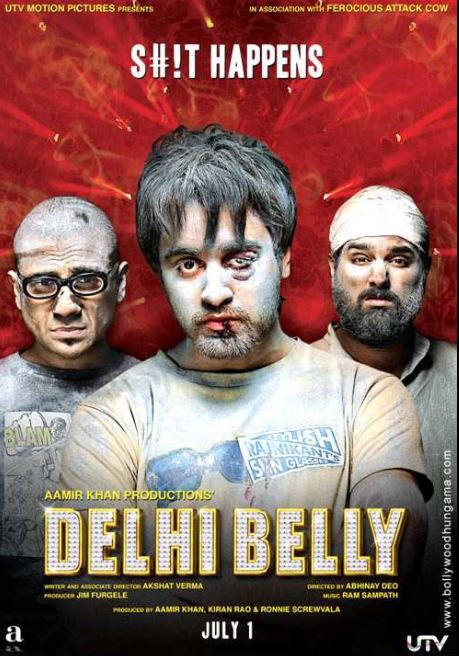 Plot: A young man and his two friends come into the hit list of a gangster when they misplace his diamonds.

Why is it Funny: Delhi Belly dared to stand out of other Hindi comedy movies by providing an @dult comedy without crossing the lines of vulgarity. The film was produced by Aamir Khan and starred his nephew Imran Khan. But one character who made this film a wholesome entertainment was Vijay raaj. The actor is already famous for his iconic roles of Kauwa Biryani in Run and Airport officer in Dhamaal.

Funniest Scene: When Vijay Raj enquires about the package in a hotel room 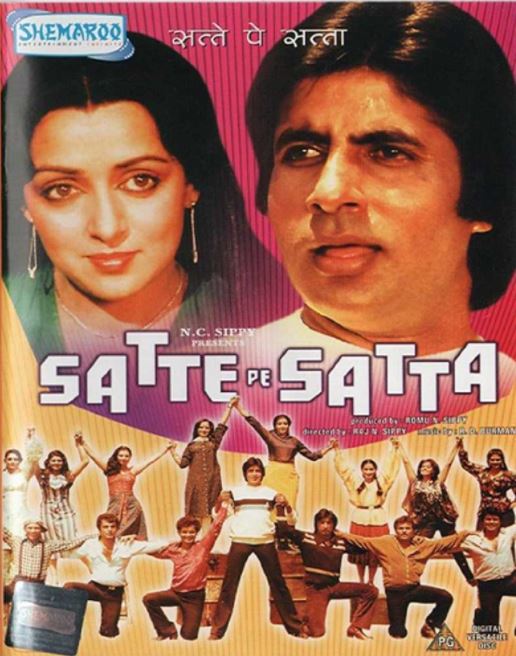 Plot: The eldest brother of Seven brothers is kidnapped and replaced by a look alike.

Why is it Funny: Amitabh Bachchan was fond of movies that offered him duplicate roles. But interestingly audience enjoyed his double performances. Satte pe Satta is one such film that saw Amitabh Bachchan in a double role. The film is inspired from classic Hollywood film Seven Brides for seven brothers.

Funniest Scene: When Ravi tells how dangerous Daaru is for lever. (One of the most mimicked scenes in Bollywood) 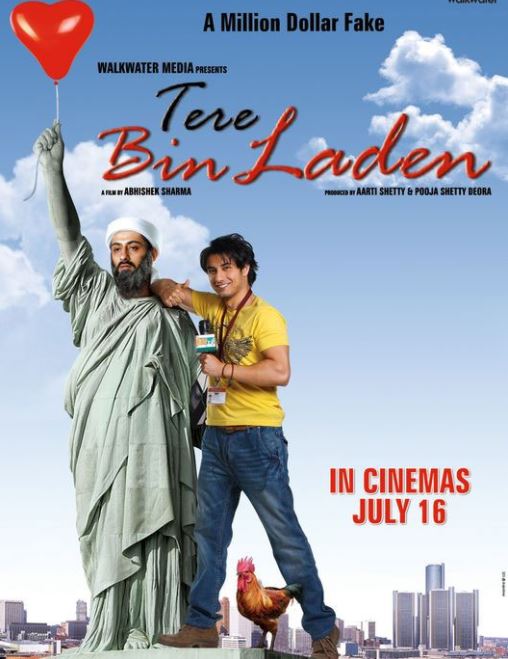 Plot: A Journalist finds a look-alike of Osama Bin Laden and he uses him to get a visa for America.

Why is it Funny: For those are unaware of Bollywood comedy movies, yes there is a film on Osama Bin Laden. It is not like the thriller movies made in Hollywood on the life of Osama. In fact, Tere bin Laden is a comedy film that has a unique take on the subject of terrorism. The film is brilliant due to its tight script writing.

Funniest Character: Can you Imagine Osama Bin laden being funny? 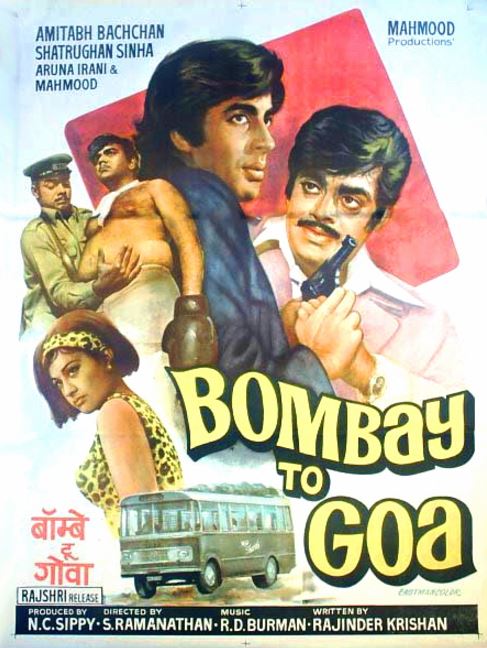 Plot: The duo of a bus driver and conductor are given information about a hidden treasure and they decide to change the route of the bus to find it.

Why is it Funny: Ensemble cast comedy movies are always fun to watch because there are not so many characters to look out for. Bombay to Goa is one such unique comedy movie that was Bollywood’s first road trip movie. It stars actors like Amitabh Bachchan and Shatrughan Sinha but the one man who steals the show is Mehmood. Plot: Guddi is a big fan of Dharmendra and wants to marry her. However, his family wants to teach her the difference between real and reel life.

Why is it Funny : Guddi is a metafictional Hindi comedy movie. Hrishikesh Mukherjee was master in making movies with scripts that directly touches the heart of the audience. Guddi is a perfect example of it. 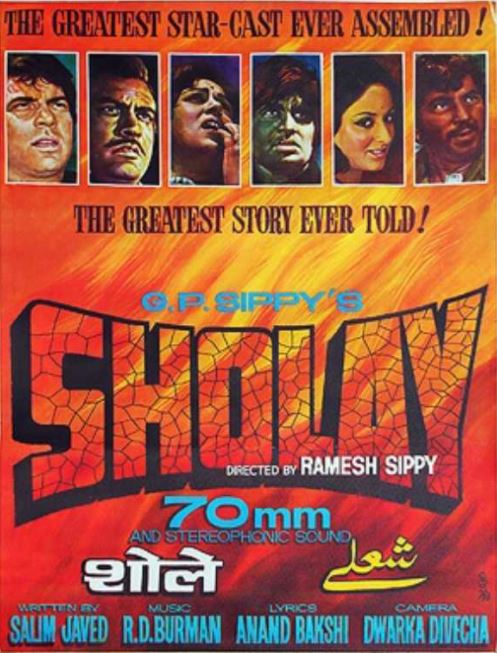 Funniest Scene: When Jai Veeru plans to break out of prison 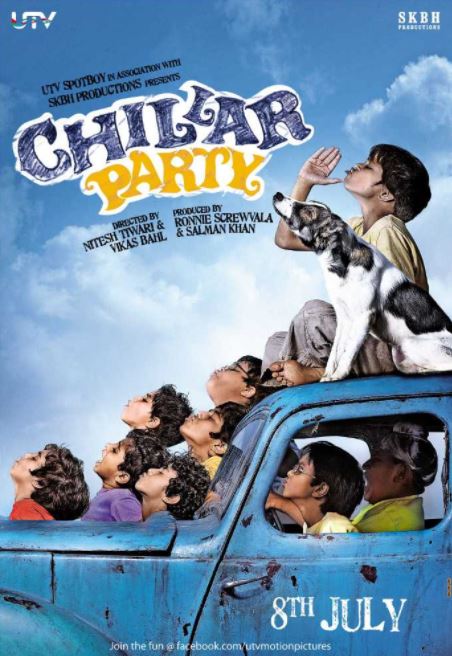 Plot: Kids from a society befriend a homeless kid and his stray dog. The problem arises when society decides to get rid of the dog.

Why is it Funny: It’s sad that Bollywood only focuses on action or @dult movies while a huge portion of the Indian audience includes teenage boys and girls. Hollywood is full of family and kids movies but our cinema only has few movies in this genre. Those too are ripped off of popular Hollywood movies (Remember Hary putter). Kids movie can turn out entertaining to the audience of all age groups. Chillar party is a perfect example of it. 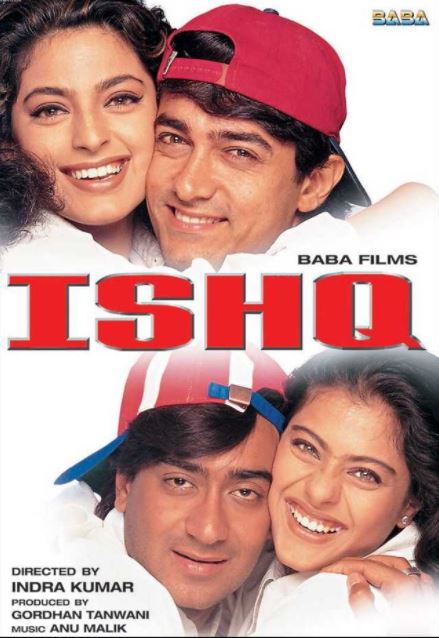 Funniest Scene: When Raja and Ajay hangs over a pipeline on a tall building 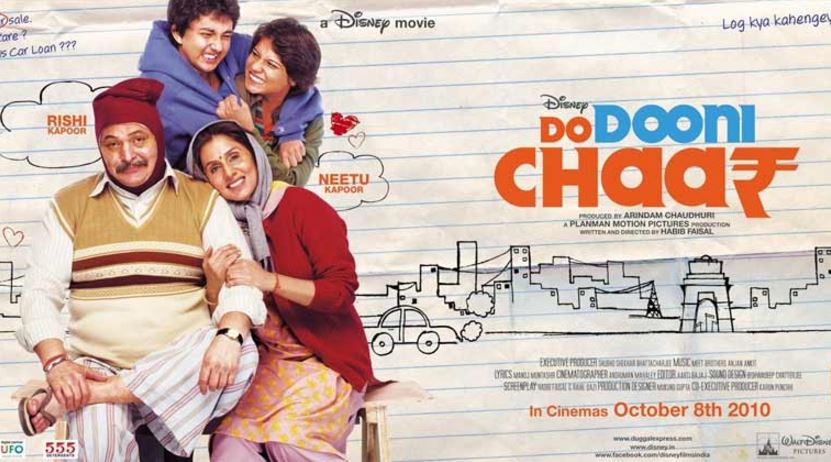 Plot: An underpaid teacher is forced to look out for extra ways so that he can fulfill the demands of his family and live a luxurious life.

Why is it Funny: Do Dooni char shows the real face of our Indian society with the pinch of humor. This movie shows how an honest man can be lured to corruption and do things he didn’t wish to. The film raises the subject of underpaid government employees who see boys much younger than them living a luxurious life. Watch it for the awesome combination of Rishi Kapoor and Neetu Singh.

Funniest Scene: When the Duggal family goes for wedding 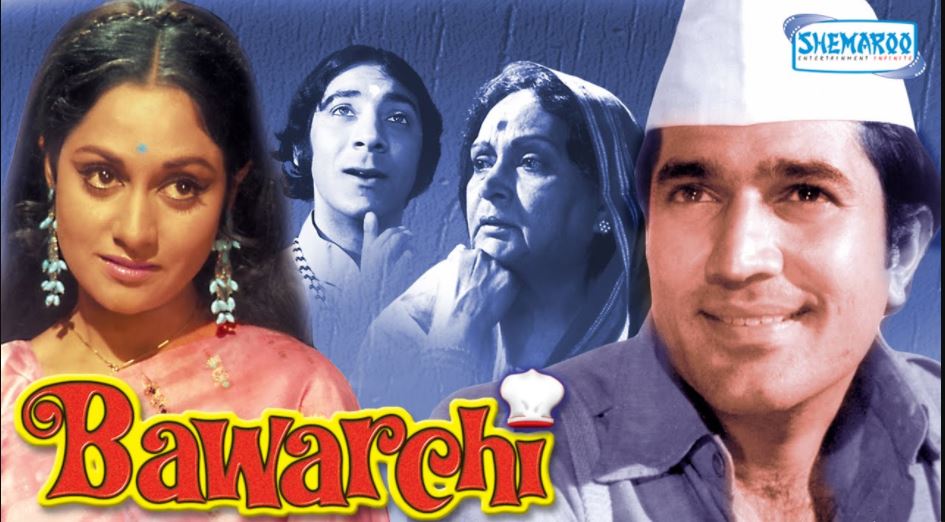 Why is it Funny: Bawarchi will remind you of days when people worked on a salary of just 30 rupees per month. This film will take you back to the golden era where families still used to live together. The good thing about Bawarchi is that it does not ride on the shoulder of one star but rather gives equal importance to each character. Rajesh Khanna played the titular role of Bawarchi. Can you imagine a modern superstar being cast among other characters who are given equal footage?

Funniest Scene: When Raghu befriends Daduji and the three brothers. 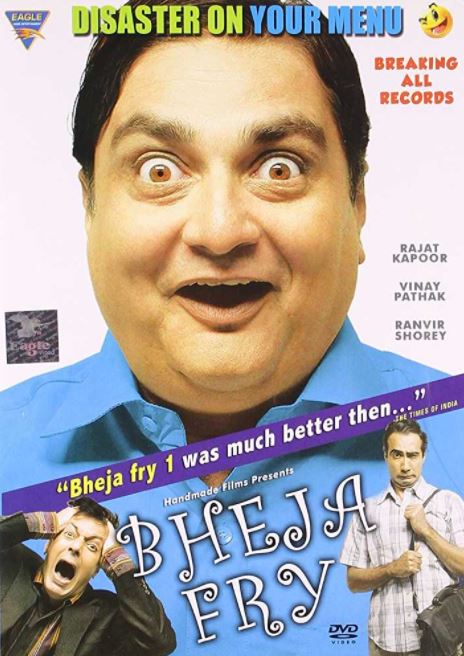 Why is it Funny: This relatively unknown film expanded into a trilogy yet none of them was as good as the original Bheja Fry. Vinay Pathak showed that a film can win the heart of audience even without a superstar in it. The film is based on characters that you can find in your day to day life. This is the plus point of the film. 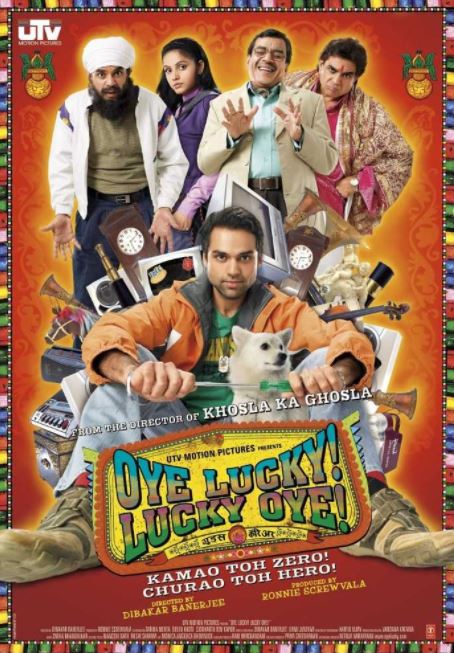 Plot: Lucky became a popular thief who often cons police and even media. He falls in love with a young girl and decides to leave the path of crime.

Why is it Funny: Remember the time when everyone thought that Abhay Deol is the next big thing in Bollywood. It was due to this sleeper hit film. Abhay surely showed his versatility in movies like Dev D and Shanghai but the status-hungry audience did not accept yet another talented actor. Oye Lucky Lucky Oye is another offbeat Hindi comedy movie that you should not miss.

Funniest Character: Lucky and His father 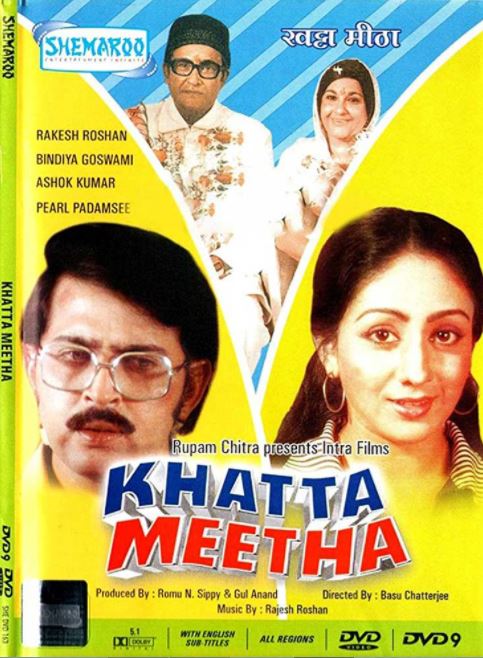 Plot: A 60 year old Parsi widower decides to settle down with another old widow woman. However, the plan backfires when the families of both widowers do not cooperate with each other.

Why is it Funny: Basu Chatterjee has directed a dozen of offbeat films which shook the Indian society to its core. Khatta Meetha is one of his finest movies which beautifully handle the subject of old age marriage. Our society usually does not see the marriage of divorcees and widowers in good light. However, this film beautifully explores this subject. 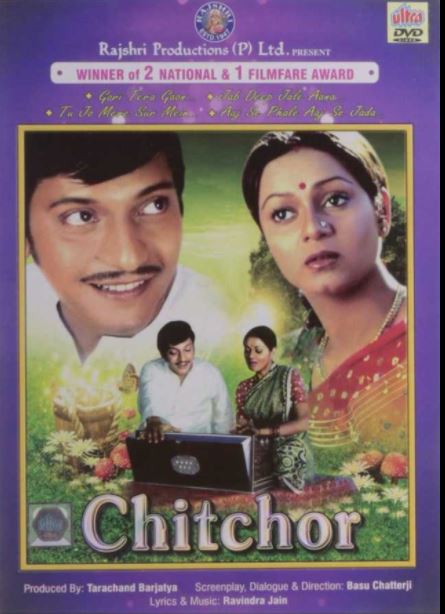 Plot: A Young engineer is sent to a remote village where he falls in love with a beautiful girl.

Why is it Funny : Chitchor is a very beautiful romantic comedy movie. Amol Palekar was lurking under the shadows of superstars like Dharmendra, Amitabh Bachchan, Jeetendra and Rajesh Khanna at the time. However, he got his own cult fan following due to his simplistic and feel good movies like Chitchor.

Funniest Scene: When Vinod comes to the village 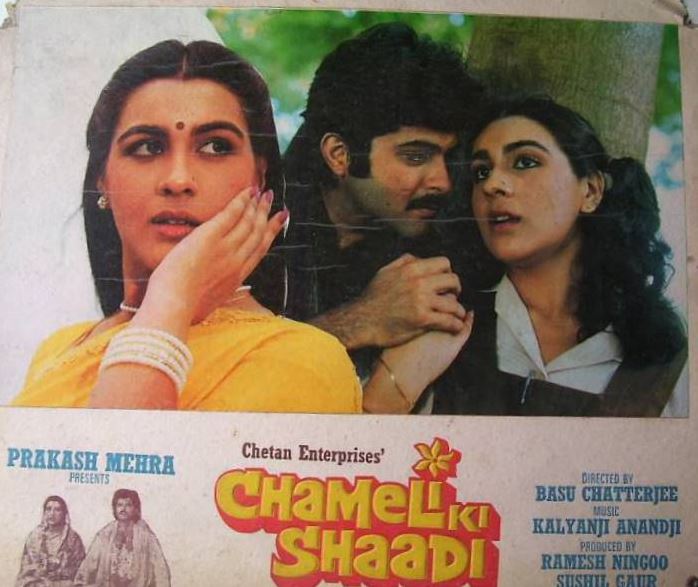 Plot: A boy and Girl from two different castes fall in love. Their love is opposed by their families but with the help of an advocate, they decide to get married.

Why is it Funny: Most people remember Amjad Khan for his iconic role of Gabbar in 1975 film Sholay. Little do they know is that the man was a versatile actor and showed his comic timing in Basu Chatterjee’s Chameli Ki Shadi. But Amjad was not the only highlight of the film. Chameli ki Shadi had an ensemble cast of Amrita Singh, Anil Kapoor, Om Parkash, and Pankaj Kapoor. The film perfectly satire on an Indian caste system which still has its root deep down into our society. 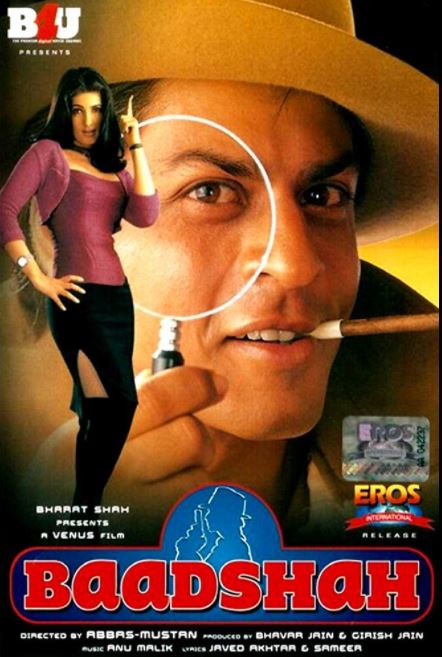 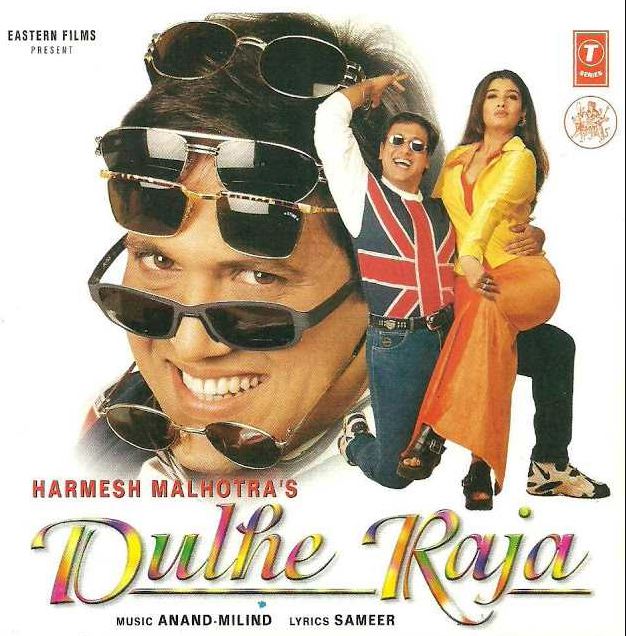 Plot: A Dhaba owner develops a love-hate relationship with a luxurious hotel owner. Things take a comic turn when he falls in love with his daughter.

Why is it Funny : Never Ever doubt a Govinda movie. The man is king of comedy and he always will be. It is hard to pick the best Hindi comedy movie of Govinda. He has given us so many entertaining films that it is hard to rate down one movie from another. Dulhe Raja stands out of the crowd due to the perfect chemistry between Johnny Lever, Govinda and Kader Khan.

Funniest Scene: When Bankey takes the call of Raja while sitting on a Pole 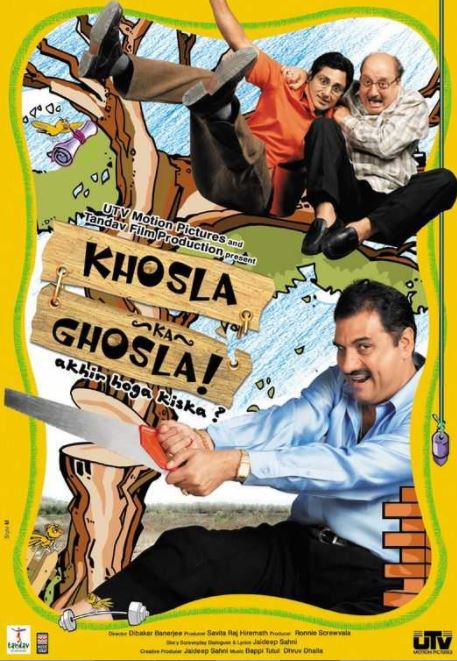 Funniest Scene: When Bapu and Mani closes the deal with Kishen Khurana 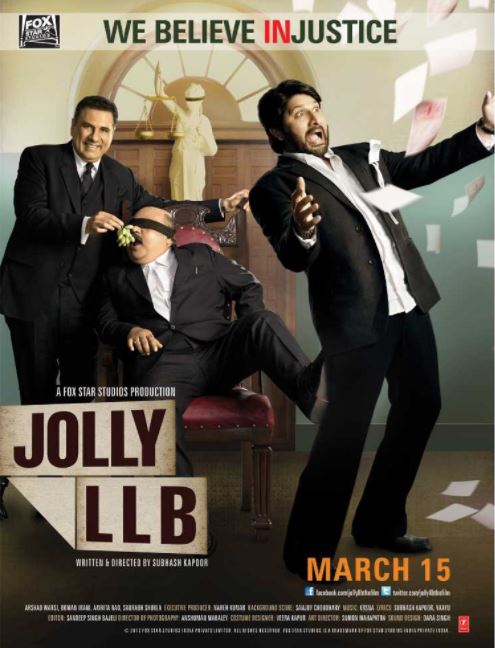 Plot: A Struggling lawyer who is scheming to become a top lawyer turns to the path of honesty and decide to help a poor client.

Why is it Funny: Even though I am a big fan of Akshay Kumar yet I have to admit that Jolly LLB 2 was not half as good as original Jolly LLB. Kudos to Arshad Warsi, Boman Irani and (especially) our ‘teddy bear’ judge Saurabh Shukla; who made the film so entertaining. The original film won two national awards include best Hindi movie and best supporting actor for Saurabh Shukla. 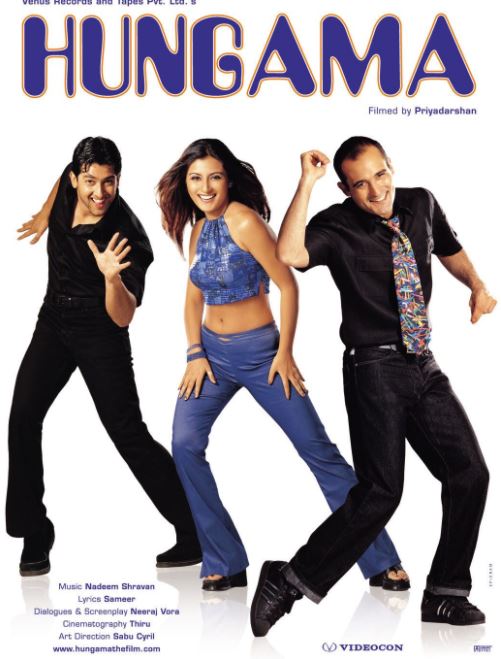 Plot: A series of mistaken identities affect the married life of Radheshyam Tiwari and Anjali Tiwari along with love life of Jeetu, Nandu and Anjali.

Why is it Funny : Priyadarshan is fan of mistaken identity comedy movies. But he never let the formula stale. Hungama is yet another masterpiece Hindi comedy movie from the maestro. The only depressing fact about the film is that Audience and Bollywood overlooked the immense talent of Akshaye Khanna. Paresh Rawal once again proved his versatility with this film.